Macao to get RMB clearing center

Premier Li on Oct 11 delivered a speech at a cooperation forum between China and Portuguese-speaking countries.

Premier Li Keqiang said in Macao on Oct 11 that China is willing to build more substantial economic and trade ties with Portuguese-speaking countries. 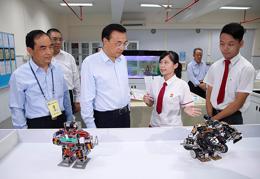 Premier Li showed great enthusiasm about the high-tech equipment manufacturing during a half-day tour in Guangdong. Promoting entrepreneurship and innovation will offer college graduates opportunities for fair competition no matter where in the country they come from.

At the Global Entrepreneurial Leaders Forum on Oct 12 in Shenzhen