On June 11, Premier Li Keqiang inspected the agricultural production at a village in Hengyang, Hunan province. 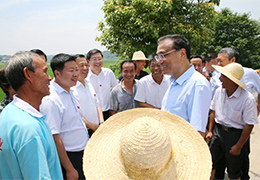 Efforts should be made to develop open and shared industrial internet platforms, and gather talented people with the new mechanism.

The industry transfer from East China to the central and western regions is both a national phenomenon and an undertaking in line with economic rules.