Premier Li Keqiang wished for permanent unity among all ethnic groups during a visit to Jokhang Temple in Lhasa on July 26.

Premier Li met with senior and retired Tibetan officials in Lhasa, affirming their contributions to Tibet’s development and stability. 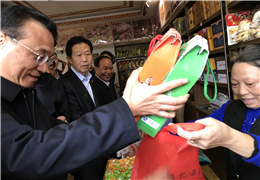 The Sichuan-Tibet railway is of great significance to the development and ecological protection of Tibet; it is not only the hope of the Tibetan people, but also the wish of the entire country.

Visiting the construction site of the Sichuan-Tibet railway in Lhokha, Tibet autonomous region, on July 26

During an inspection tour to Nyingchi prefecture, Tibet autonomous region, on July 25