Premier Li Keqiang delivered a speech at the opening ceremony of the Annual Meeting of the New Champions 2019 on July 2 in Dalian, Northeast China’s Liaoning province.

Showing of reform, opening-up at WEF

A meeting was held during the 2019 Summer Davos, where Premier Li Keqiang answered questions from representatives.

China will ramp up efforts to reduce financing costs for small and medium-sized enterprises in 2019, Premier Li Keqiang said on July 2.

NE to step up reform, opening-up

Reform and opening-up plays a key role in revitalization of the Northeast, Premier Li said during an inspection tour to Dalian.

Implementing the policy of reform and opening-up is a crucial step toward the revitalization of Northeast China, Premier Li Keqiang said on July 1. 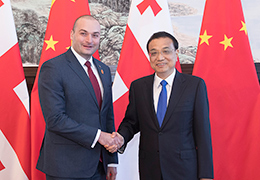 $3.44b in deals won on sidelines of Dalian meeting

Agreements for 16 projects with a total investment of 23.6 billion yuan ($3.44 billion) were signed on July 2 on the sidelines of the ongoing Annual Meeting of the New Champions 2019.

China’s investment environment will continue to improve, with more transparency and predictability, and wider opening-up.

China and WEF should grasp the opportunity of a new round of industrial revolution to improve Summer Davos to create a new playing ground for new leading forces.