Signals from the press conference

Facing sharp questions, a series of positive economic signals were found in the Premier’s answers.

China has many weapons to fight difficulties in its economy and will be able to maintain its growth momentum, the Premier said.

A total of 46 suggestions from netizens were added to this year’s government work report delivered by Premier Li Keqiang on March 5.

China’s national lawmakers voted for a revision to the Legislation Law on March 15.

Chinese political advisers have voiced full support for Beijing’s bid at the annual session of the CPPCC.

Poor translation targeted in confusing signs of the times

Foreign visitors are sometimes confused by hilarious or unfortunate translations on signs in public areas in China.

Fisherman Li Keping, a National People’s Congress deputy, has devoted himself to promoting the interests of fishermen. Premier Li at the press conference 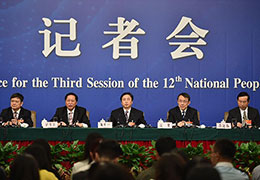 The closing session of the 3rd Session of the 12th NPC is convened at the Great Hall of the People. After that, Premier Li Keqiang meets journalists from home and abroad and takes questions.

Among different items on the agenda of the two sessions, the economic model of “new normal”, along with deepening reforms, has become a focus of world attention.

The Belt and Road initiatives are among the most extensively referenced topics during the ongoing annual parliamentary session.

Andrey Ivanovich Denisov, Russian ambassador to China: The government work report has significance not only for the Chinese but also for people around the world.

Borislav Maric, ambassador of Bosnia and Herzegovina’s to China: I think the world will be a better place thanks to the policies of China.

Sina Weibo user Huahuabing: We should try our best to keep a good network environment and say “no” to harmful information.

Sina Weibo user bangzili: I’d like to thank the deputies and members for having proposed many hot and sharp issues as the two sessions are to conclude.